She’s been on the news twerking, riding naked on a wrecking ball and wagging her tongue so much that recently it’s been hard to turn an eyeball without seeing Miley Cyrus’ half-naked bottom or top half. And yeah, I’ve tried! 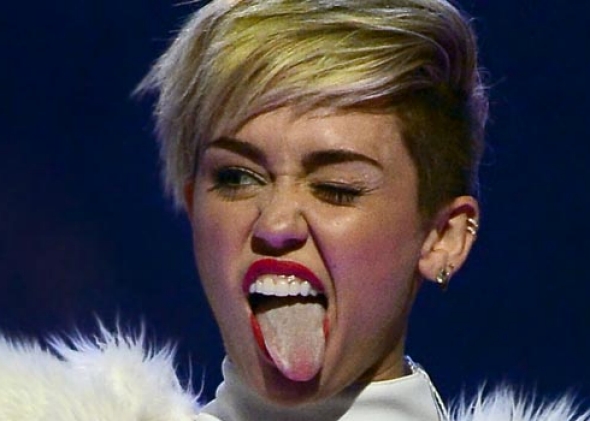 The pop star, who’s doing a bravo job shredding her former teen star image, has raised a few eyebrows not just with her bumtastic moves but also with her tongue.

For someone who likes to whip out that piece of flesh every possible minute, Miley’s tongue looks especially bad. It’s white. It has a slimy film on it. It looks like it might harbour the next serious SARS bug.

It just doesn’t look like something you’d want to parade around on the telly or in front of the paparazzi.

There are many possible causes for a white tongue. The white coating we’re seeing in oh-so-many photos builds up thanks to accumulating debris, dead cells and bacteria that get stuck in the tongue’s nodulated surface.

The good news? The inflammation that causes white tongue is usually temporary, and it can be the result of dehydration, fever, smoking or excessive drinking.

If it’s this harmless, a lot can be done with better dental hygiene. Miley should brush up (ha) her teeth cleaning skills, start scraping her tongue and use peroxide-based mouthwash. This might be enough to get her favourite accessory looking healthy and pink again.

And the bad news? This is where things get hairy. A white tongue can be a sign of leukoplakia, a condition that’s brought on especially by tobacco products and can be linked to cancer. Another potential cause is a yeast infection called an oral thrush, which sometimes results from taking steroids or antibiotics. Then there’s an autoimmune disorder called oral lichen planus. An eating disorder or—no kidding—syphilis could be the culprit too.

Whatever the reason for the white-out look, the first thing Miley should do (or have her army of assistants do) is pick up the phone and make an appointment to see her dentist. A good dentist can quickly determine whether the condition is harmless or serious and recommend a treatment for it.

And all you future pop stars out there: Get cracking on your dental hygiene!

About the Author: Dr Luke Cronin